Whale Vomit Auctioned for $16700, Much Higher Than Expected

Owner of whale vomit ambergris found last month on Wales beach by a pet owner was sold out at a whopping price of $16,700 as its use in perfume industry is well-known.

Auctioneer Adam Partridge said there was an increasing response when the item came on to the table under hammer. “There are many things which can be mistaken for ambergris – fat, rubber and palm oil amongst others – but after doing some research and consulting the authorities on such things, we found out that what we had was indeed very valuable. We’ve had lots of unusual items pass through the doors over the years, but this is by far the weirdest,” he noted.

The whale vomit, a treasure for perfume industry to enhance the scent or prolong the duration with which a fragrance lasts, was initially expected to sell at around $10,000 but it went off at $16,700 finally on Friday.

The lump of yellow and black ambergris, measuring just 20 centimeters in length, however did not have any bidders present physically as one was a telephone bidder and the other was on the internet. However the details of buyer were not disclosed by the auctioneers. 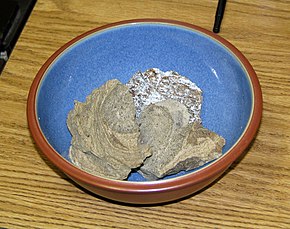 Auctioneer Adam Partridge said he was “elated” at the sale. The ambergris, 50-year-old, was found on a beach on the island of Anglesey in North Wales. It is formed in the digestive system of a sperm whale and is passed out either as vomit or as part of the faeces. Scientists believe it is used to coat irritating objects in the whale’s intestines when they eat metals or plastics.

This is the first time the substance was auctioned in open. Chris Surfleet, senior valuer and auctioneer in London said: “We are 100 per cent certain it is ambergris. A number of people with experience with ambergris have studied it who have confirmed it. It is a bit like gold in that it comes down to the price per gram. There is a lot of interest in unusual items these days.”

However, some nations do prohibit trade in ambergris but when it is found washed ashore, the discoverer can keep it, said the auctioneer to ward off fears of authorities pounding on the bidder.

Although ambergris was once highly valued by perfumers as a fixative allowing the scent to last much longer, it has been replaced by synthetics now.

Ancient Egyptians burned ambergris as incense, while it is used in cigarettes to give scent to the tobacco smoke. In ancient China, it was called “dragon’s spittle fragrance”.

When plague was at its peak causing Black Deaths in Europe, people believed that carrying a ball of ambergris could help prevent them from getting the plague as its smell overwhelmed the smell of the air due to deaths of plague.

Ambergris has also been used as a food flavouring agent and as an aphrodisiac in some cultures, while it was used in Europe in the medieval times as medicine for headaches, colds, epilepsy, and other ailments.

10 Drones Capable of Spying From Sky Seized, What’s Next?