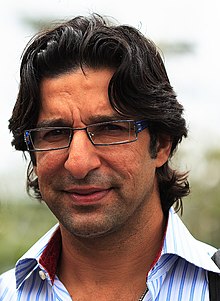 Pakistan cricketer Wasim Akram was shot at by a group of men who rammed his vehicles from behind and got down to fire at him in Karachi, while he was passing by Karsaz area on his way to the national stadium on Wednesday.

While Wasim Akram escaped unhurt in the incident, it is still not known whether he was targeted for killing or was given some sort of warning by his detractors. An early diabetic, the former Pakistan cricket captain lost his wife to multiple organ failure in Chennai and is married to an Australian.

Wasim Akram is currently a coach for Kolkata Knight Riders of IPL in India, which is owned by Shahrukh Khan.

GeoNews of Pakistan has reported that he was on his way to the stadium to attend a bowling camp. “A car hit my vehicle from the rear and a person sitting in the other car fired a shot at me,” said Akram, Pakistan’s fast bowler.

A man of least controversies, he was the only link between India and Pakistan.

Spot Fixing Scandal: Sreesanth, 2 Others Let Off by Court