The image was taken by unmanned space probe Mercury-Redstone 1A on December 19, 1960. 'It's actually the Earth in the background and the UFO is in space observing the Mercury capsule,' Waring said.

Was there a conspiracy to cover up an extra-terrestrial spaceship by NASA in a 55-year-old photograph, ask UFO enthusiasts citing the UFO Sightings Daily photograph.

It was when man was taking his first steps to space that the alien spaceship was observing from above how man takes on to space.

Scott Waring of UFO Sightings Daily says the eerie interstellar visitor is seen in the background skulking and captured by NASA’s Mercury project, that had put human beings in space for the first time. 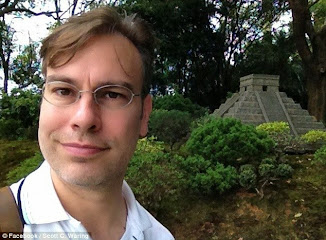 “It’s actually the Earth in the background and the UFO is in space observing the Mercury capsule,” says Waring showing the photograph and addes that aliens were very much interested in watching a historical moment for humans.

“I found a disk in some photos of the Mercury mission. The disk is hard to make out in the first photo, but three photos later its easy to see. It looks like a classic disk with a wedge cut out of it. Since the capsule was unmanned, there were no worries that they would be seen.”

However, NASA may not respond to these tricks by UFO enthusiasts to solicit some response. In fact, many times, the website turned out to be over-imaginative in highlighting images in a different perspective in support of the UFO sightings.

The photo taken during the launch of an unmanned mission, Mercury Redstone 1A on Decemebr 19, 1960, was used by Waring to defend the UFO or alien theory. The Mercury Mission lasted for five years from 1958 to 1963.

Waring in collaboration with other UFO researchers, has brought out several images of early NASA photos to point out some UFO object or presence. In another instance, he showed two glowing objects in a photo from the Gemini mission in 1966.