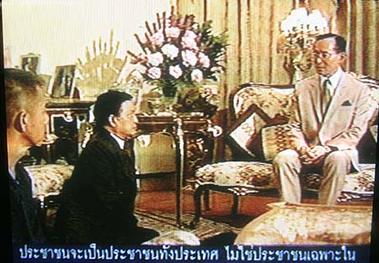 Royal intervention on the night of 20 May. Chamlong Srimuang (left) and Suchinda Kraprayoon (middle) submit to the King (seated).(Wikipedia)

Thailand has been beset with chronic mutinies and military regimes but never did any military ruler nor a civil premier dared to utter a word about their King, not merely because of a law that explicitly prohibites it but because he was respected by all Thai citizens as a father figure who cared for them.

Such was a persona surrounding King Bhumibol Adulyadej that his death comes more as a grief to every Thai family as he was revered as “Dharma Raja” in true sense of dedication to his people. Heir to 800-year-old monarchy in Thailand, Bhumibol’s regin lasted for 70 years making him the world’s longest reigning monarch, until his death on Thursday at the age of 88.

His son Crown Prince Vajiralongkorn will be declared as King Rama X but it would be more than year for him to ascend the throne officially as one year mourning period will continue in the country. Bhumibol remains omnipresent in every corner of Thailand for his work and service to the country despite repeated military military coups in the country.

On Social front, he was not only seen as above the government and as the ultimate word in politics, his call for war on drugs resulted in more than 2,500 deaths of supposedly drug-peddlers by the police amid international hue and cry. In all, the King had an enormous impact on every facet of Thailand’s politcs, social life and peace or military coup.

Unlike his father, Crown Prince Vajiralongkorn is not very popullar and mostly lived in Germany. It remains to be seen how the Thai monarchy under the new King keeps a tab on its influence over the pulse of the nation, especially the military generals.