A South Korean study, affiliated with UNIST has introduced a method for the remote detection of hazardous radioactive substances. With the help of this newly-developed detection device, the detection of various types of radioactive materials in far flung North Korean geographies will be possible now.

In their study, published in the May issue of the prestigious journal, Nature Communications, Professor Eunmi Choi of Natural Science and her team demonstrated a method with higher sensitivity that uses high-power pulsed electromagnetic-waves to detect a radioactive source. 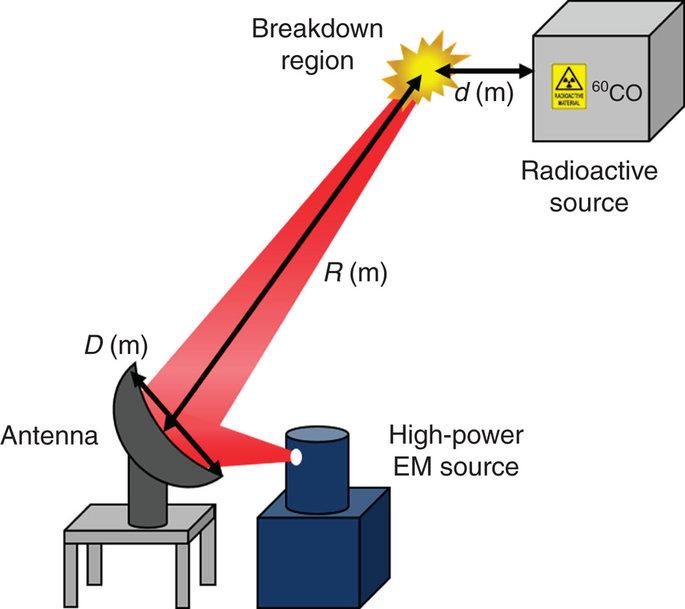 This is a schematic of a possible setup for the detection of radioactive material inside a container. CREDIT: UNIST

A substance is said to be radioactive if it contains atoms with unstable nuclei and gives out nuclear radiation in the form of alpha particles, beta particles or gamma rays. Uranium-235 (U-235) is an isotope of uranium widely used for nuclear power generation and, like all other radioactive isotopes used in medicine, it has been also employed for diagnosis and treatment of diseased organs and tumors. They are essential to mankind, but can have fatal consequences if it is accidentally leaked or used as a weapon.

Remote detection of radioactive materials is impossible when the measurement location is far from its source. Indeed, a typical radiation detectors, like Geiger-Muller counters have technical limitations in the remote detection of sources. For instance, they can detect 1 milli Curie (mCi) of Cobalt-60 (60Co) at a maximum distance of 3.5 metres, but are inefficient at measuring lower levels of radioactivity or at longer distances.

In the study, Professor Choi and her research team described the experimental demonstration of real-time radioactive material detection using a high-power pulsed millimetre-wave source. They demontrated the detection of 0.5 μg of cobalt-60 from 120 cm away, the maximum distance allowed by the laboratory setup.

“With the existing technologies, remote detection of radioactive materials is impossible when the measurement location is far from the radioactive source,” says Dongsung Kim (Combined M.S./Ph.D. student of Physics), the first author of the study. “The detection sensitivity has been increased to 4,800 times, compared to the conventional theoretical sensitivity, enabling the detection of very small amounts of radiation.”

“Depending on the equipment used, this method could scale to detect radioactivity at distances of at least tens of kilometers and possibly as far as 100 km,” says Professor Choi.

North Korea Threatens Use of Nuclear Bombs if US Attacks