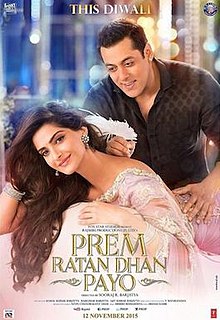 Salman Khan-starrer family drama ‘Prem Ratan Dhan Payo’ has remained on top as it finished the second weekend at Rs.193.22 crore and another Rs. 86.57 crore ($13 Million) in overseas markets, with the release of Bond film ‘Spectre’, which took over the centre-stage in box office collections now.

Trade analyst Taran Adarsh tweeted the figures describing the performance of PRDP in the overseas markets as “superb”. He has given market-wise collections as below:

Leaving aside uncomparable’Bahubali’, ‘Prem Ratan Dhan Payo’ has remained the fourth film in terms of box office collections after Salman Khan’s last film “Bhajrangi Bhaijan” that went on to collect Rs.240.72 crore this year, creating a record next only to “Bahubali”.

Another record for Salman Khan was that all his film put together have grossed Rs.500-crore in the year 2015, making him a big industry in his own capacity. Otherwise, Aamir Khan’s “PK” stands at Rs.217.21 crore and Shahrukh Khan’s “Happy New Year” with Rs.174.75 crore comes next.

Otherwise, Bond film “Spectre” has been reigning the box office collections with highest weekend earnings ever re3corded for a Bond film. With its Thursday preview collection of Rs.2.26 crore, Friday collections at Rs.6.14 crore, Saturday collections at Rs.7.28 crore and Sunday at Rs.7.82 crore, the Bond film has totaled Rs.23.50 crore in its first extended weekend release in India.