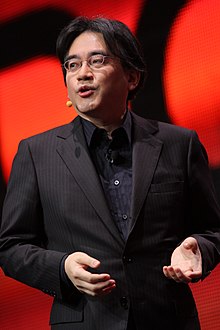 Satoru Iwata presenting at the Game Developers Conference in 2011. He died in July 2015 due to a bile duct tumor.

The idea for the game was conceived in 2014 by Satoru Iwata of Nintendo (who died in July 2015) and Tsunekazu Ishihara of the Pokémon Company as an April Fools’ Day collaboration with Google called Pokémon Challenge, with geographical location-based tech know-how from Tatsuo Nomura of Google Maps. Nomura later became a full-time senior project manager at Niantic.

In March 2016, Niantic announced a Japan-exclusive beta test allowing players to help in refining the game before its full release and the beta test was later expanded to other countries. In April it was tested in Australia and New Zealand and then in May the field test sign posts were opened in the United States. The beta test ended on June 30 and the game was released on July 6 and the download has crashed the website the next day, slowing down its release in other countries and Europe.

The decision to create the Go Plus as bluetooth evice instead of a smart watch app was to increase uptake among players for whom a smart watch is expensive, said the Niantic team. The Pokémon Go Plus Bluetooth is a low energy wearable device that allows the player to walk without looking at their smart device.

It allows a more “heads-up” experience than the previous version of AR game Ingress. When the player is near a Pokémon or Pokéstop, the Plus device vibrates and the player can then press the button to capture the Pokémon. However, he cannot check what they was caught until it is connected to a mobile device or a tablet. The Plus bluetooth costs $34.99 and is available in Amazon for over $100 as the official Pokémon store sold out all of them already.

Niantic CEO John Hanke said the company faced server strain when it was released and had to pause until the issue was fixed. Within 24 hours after its release, Pokémon Go topped the American App Store’s “Top Grossing” and “Free” charts. It became the fastest game to top the App Store and the Google Play, beating Clash Royale.

Within 6 days, the Pokémon Go has an estimated 7.5 million downloads in the United States alone, while Australian servers were down under pressure in Sydney, Melbourne and Brisbane due to downthe game downloads.

Buoyed by the success, Nintendo plans to release four more smartphone app games by March 2017. It has some of the “most valuable character intellectual property in the world” with franchises such as Super Mario, The Legend of Zelda, and Metroid.

After the first week of its release, the game surpassed the average daily usage of the app on Android devices exceeding Snapchat, Tinder, Instagram, and even Facebook.