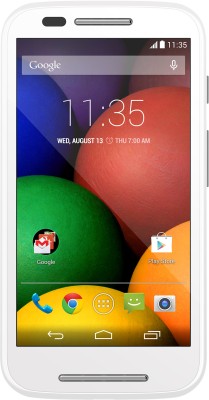 Motorola is all set to launch its next generation Moto E smartphone priced at Rs.6,999, which will be available for sale online from e-retailer Flipkart from March 10.

The Moto E Next Gen device is priced Rs.1000 higher at Rs.6,999 compared to the current price of Moto E at Rs.5,999. However, despite expectations, Moto E has not included a flash in its 5MP rear camera.

The new device has a 4.5 inch with 960×540 resolution display, fitted with 2,390mAh battery that the company claims will run the whole day.

The second generation Moto E has 1.2GHz quad-core Qualcomm Snapdragon 200 CPU with 1GB RAM and 8 gigabytes of memory expandable up to 32 GB. It comes in both 3G (unlocked) and 4G variants priced slightly higher at Rs.7,430 and Rs.7,999 respectively.

With no visible changes in the design, the new generation device is similar to Moto G and Moto X and is available in Golden Yellow, Red, Purple, Blue, Turquoise, and Raspberry colours.