A Japanese origin scholar born in the United States but sent to war camps along with 120,000 Japanese during World War Two has donated some of her valuable possession of records and writings about life in these camps to University of California Los Angeles campus.

Aiko Herzig-Yoshinaga was born an American citizen in Sacramento and grew up in Los Angeles but soon her family along with her were sent to War Relocation camps in California and Arkansas during World War II where 120,000 other Japanese origin people were interned. US was at war with Japan during the World War Two after the Pearl Harbour bombing by Japan.

Aiko recollected that she was interned but not her sister, who was born in Japan and a citizen of Japan, but living with her husband in New York. Her sister was allowed to visit family at their camp in Arkansas and leave whenever she liked.

“The irony of that lived with me for a long time,” the 92-year-old Herzig-Yoshinaga recalled on a visit to UCLA, where she was honored on Oct. 26, 2016 by the UCLA Asian American Studies Center, UCLA Library Special Collections, and Dr. Sanbo and Kazuko Sakaguchi Research Fund in Japanese American Studies.

Aiko alongwith her late husband Jack Herzig began to archive 33,000 vital documents, a paper trail that not only revealed what was behind the decision to imprison Japanese-Americans, but led to the 1988 Civil Liberties Act, an official apology by the government and reparations of $20,000 paid to each camp survivor.

She discovered, for example, that part of the original intent for the camps was to hold Japanese-Americans hostage to potentially trade them for American prisoners of war — presumably white or of European descent — being held in Japan. “Why exchange an American citizen for an American citizen?” she asked. “It was baffling to me.” 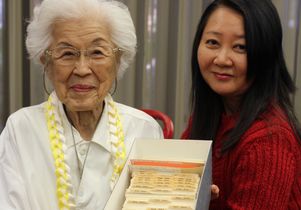 Aiko Herzig-Yoshinaga and Martha Nakagawa, who helped process the collection, hold up a box of index cards listing each item. (Barbra Ramos/UCLA)

She also discovered documents and cables that showed that officials knew well in advance, almost to the hour, that the “surprise attack” on Pearl Harbor would occur. Anticipating a war with Japan as early as 1936, President Roosevelt suggested to the army that all people of Japanese ancestry in Hawaii be rounded up and placed on the island of Molokai, known as the “Island of Lepers.”

After the Civil Liberties Act was passed, Aiko was hired by the U.S. Department of Justice to conduct research for the Office of Redress Administration to help identify survivors. Her collection, which was initially housed at the National Archives in Washington, D.C., represents decades of diving through a mountain of notes, cables, memos, official government documents, letters, transcripts of testimonies and more.

Aiko has donated the papers to UCLA later as the painful chapter in American history happened to people who lived California. “These papers offer invaluable lessons to anyone who is vitally concerned with issues of social justice and constitutionality in this country,” said Susan Parker, deputy university librarian and interim director of UCLA Library Special Collections.

COMEDK 2016 to be Held All Over India