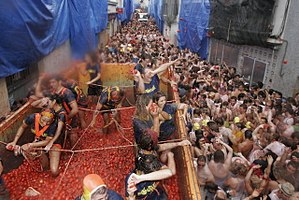 The world’s largest food fight throwing tomatoes called La Tomatina festival is being celebrated in Spain with more than 40 tons of tomatoes ready to throw at as Google made it popular with its Doodle today.

The Google doodle, when clicked, begins showing cartoon characters throwing tomatoes relentlessly at the other and the bizarre fight reminds that tomato is abundant in Spain unlike India where it is being sold at Rs.20 per kilo.

Celebrated on the last Wednesday of August every year, the hour-long festival had its origin in 1945 when a man pushed out of the town’s annual parade began throwing tomatoes at the crowd in anger. It became an annual ritual every year and an official festival in 1957 and Google Doodle today has made it globally known for a change.

In 2002, La Tomatina of Buñol was declared Festival of International Tourist Interest by the Secretary Department of Tourism and the next year’s event saw an entry fee and limited participants.

The 2015 marks the 70th anniversary of the La Tomatina festival, which has gone through successfully for 7 decades despite its inherent economics making more sense than mere the festive mood on the day.

The season also marks very high tomato yield in Europe and elsewhere and often the prices come down to zero with the abundant production. the festival ends the worry as it brings in tomato from all over Spain putting an end to market price mechanism to opeate.

Moreover, with each ticket priced €10, about 22,000 tickets will be sold this year and the money raised will be spen on tomatoes which are overgrown and available almost freely in the market. This not only compensates the farmers but even makes the event a commercially sensible one for emulation in rest of the world.

— The tomatoes have to be squashed before throwing.
— Except hands, no other projectiles should be used.
— Participants should not block the trucks and lorries on the road.
— Once the closure signal of the second shot is given, no tomatoes should be thrown.

However, back in India, especially in Karnataka, the government banned the hosting of such a Tomatina event in Bangalore and Mysore, after some private organizers tried to organize it when the then Chief Minister D.V. Sadananda Gowda defended the ban saying: “In the name of ‘La Tomatina’ festival, permission should not be granted to waste tomatoes”. Even in Delhi such move was cancelled after it received flak from the media.

However, the La Tomatino festival was used as a theme in Bollywood film ‘Zindagi Na Milegi Dobara’ when the song Ik Junoon (Paint it Red) was shown.