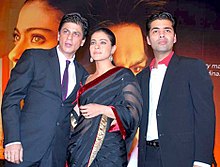 Filmmaker Karan Johar says that it would be a honour if he can cast Salman Khan in one of his movies as the director missed the chance of working with actor Salman Khan in his upcoming film ‘Shuddhi’.

Karan told HT:”Salman and I worked together in my very first feature film. In 1998, Salman played a very little part in Kuch Kuch Hota Hai. Of course, working with him was an honour, and I think he is one of our best actors and one of the finest people I know.”

Director Karan was also quoted by Hindustan Times saying that working with Salman would always be an honour, pleasure and privilege for him. The 43-year-old director has only worked once with the star in 1998, but said he would love to team up with Salman again.

Aamir Khan Admits Not Seen ‘Bahubali 2’ but Proud of it

‘Bahubali 3’ on the Cards? Yes, it’s Depending on ‘Right Script’ Now

Salman Khan Acquitted in One but Poaching Case on Still