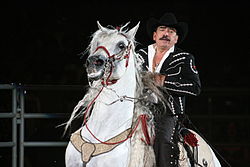 Latin American singer Joan Sebastian died, aged 64, with bone cancer and his son confirmed the death of his father in his ranch at Juliantla, Guerrero, Mexico at 7:15pm (local time) on Monday.

The singer was hospitalized for chemotherapy for the fourth time and Julián Figueroa, son of “El Rey Del Jaripeo” and Maribel Guardia, confirmed the news on the morning show “Hoy” on Mexican TV.

Earlier, Figueroa had informed the TV show that his father was undergoing new treatment for cancer that was still in clinical trials.”What is happening is that he’s under a new treatment that they are testing on my father. They are doing it at the hospital so they can see the results. My father is stable, obviously with the implications of having cancer, but he isn’t in greater danger,” but now that the singer is dead, the reaction from the family is not known.

Last year Joan Sebastian made it public that he was battling cancer during his performances in Zacatecas. “I am very conscious that this is something I have to deal with and I have fortunately been able to pull through,” he told Hoy TV show.

Known for the “Secreto de Amor”, the singer was undergoing the treatment for the fourth time in his life before he succumbed to it. Way back in 1999 Joan Sebastian was diagnosed with cancer in the bones for the first time and was given chemotherapy but it recurred in 2007 and 2012.

The “Lobo Domesticado” singer said announced for the fourth time in early 2014 that he had to say good-bye to rodeos. “I am not retiring, I am saying goodbye to the rodeos only. I am 62 years old and I am satisfied with what I have accomplished, but I know I am not getting younger,” he told media, adding that he was feeling too weak.

Born José Manuel Figueroa Sr. on April 8, 1951, popularly known as Joan Sebastian, he was a popular Mexican multi Grammy award winning singer and songwriter with hundreds of songs to his credit. He began his career in 1977 and reached top on charts with his unique mix of Latin pop, ranchera and grupera music.

Singer S.P. Balasubrahmanyam, who enthralled music lovers for 55 years, is no more