Amid secrecy surrounding Tamil Nadu Chief Minister J. Jayalalithaa’s unknown ailment, the Madras high court finally came down heavily upon the government machinery on Tuesday to inform the court and the public about the health condition of the AIADMK leader.

“AIADMK leader J Jayalalithaa is holding public office, and therefore her state of health must be clarified by government officials before October 6,” said the court.

The 68-year-old CM was hospitalised on Sept. 22 for just “fever and dehydration” but her continued stay for more than 12 days without any clear statement emanating from the Apollo Hospital has raised hue and cry across the state and the nation. Jayalalithaa was admitted to a hospital for the first time in her three decades of political career as doctors usually treat her in her Poes Garden house.

The secrecy has accentuated the speculation about Jayalalithaa, who was a famous cine actress in the entire South before becoming CM of Tamil Nadu. The unclear hospital bulletins have given way to the social media, which took advantage of the situation to spread even death rumours until the police sternly warned miscreants and rumour-mongerers, and even filed a case against one author Tamizhachi for her Facebook post.

Finally, an activist KR “Traffic” Ramaswamy filed a PIL on Monday that turned the attention of the court to seek clarification on the chief minister’s health from the fortress of Apollo Hospital that is giving out orders in the name of Chief Minister. “The public needs to know the truth,” Ramaswamy insisted.

Finally, the hospital on Monday said Jayalalithaa had been on a respirator, and is currently undergoing treatment for an “infection”. A sepsis specialist from London has been flown in to oversee her recovery. Sepsis could be mild and also severe, with varying degrees of treatment.

Both Jayalalithaa’s family friend Sasikala and her former IAS adviser Sheela Balakrishnan are camping in Apollo Hospital to help carry out the day-to-day affairs of the party and the government, respectively. But Jayalalithaa’s admirers and fans across the state are pouring in to see “Amma”, as they fondly call her.

In its latest bulletin, Apollo Hospitals remained ambiguous saying the same line of treatment is being given to the chief minister without explaining further as shown below: 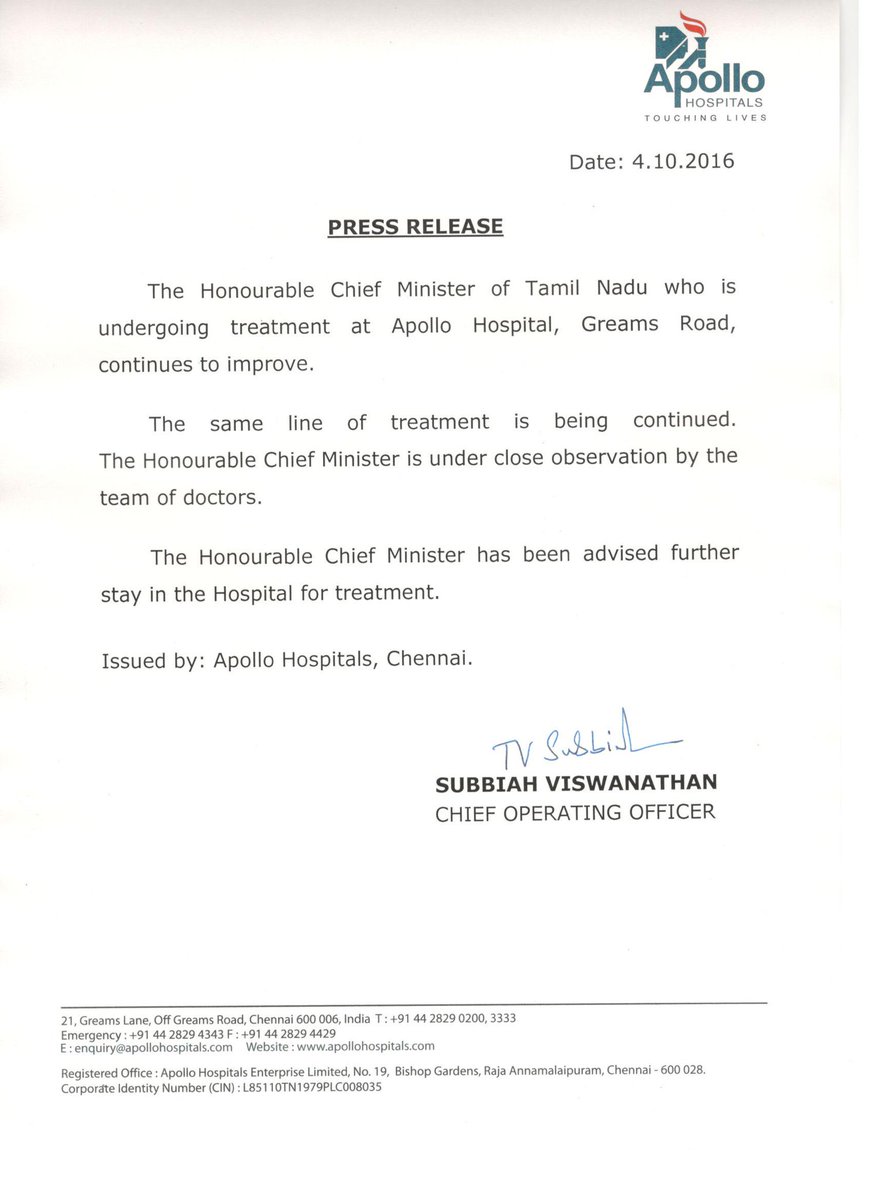 Will Sasikala be Real Heir to Jayalalithaa?