India’s bowling form will be thoroughly tested during the tri-series preceeding the World Cup 2015, said Javagal Srinath in a column on ICC-Cricket for World Cup. 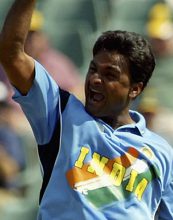 There weren’t any major surprises when India’s selectors announced the 15-man squad, which will try to defend the ICC Cricket World Cup it won at home four years ago. When it comes to the selection of a team for a tournament such as the ICC Cricket World Cup, there are only two or three positions at the most that are up for discussion and debate. The majority of the squad picks itself.

It is the current form of the players that usually decides those final two or three available slots. I am sure the whole of India will be talking about the exclusion of Murali Vijay, who has been in great form both on this tour of Australia and in England last year. I am not sure if the selectors have moved away from the concept of rewarding good performances in one format of the game with a place in another format being played in the same country.

The essence of winning the ICC Cricket World Cup 2015 revolves around playing with great fluency on the Australia pitches, and Vijay has been nothing if not fluent all through the Test series. That confidence would have worked wonders for Vijay and would have rubbed off on the rest of the team, so his non-inclusion comes with a question mark. But having said that, India’s batting is well set with the likes of Shikhar Dhawan, Rohit Sharma, Virat Kohli, Ajinkya Rahane and Suresh Raina, not to mention MS Dhoni himself.

This is amply reflective of the strength at the top of the batting order, so perhaps the selectors might have felt that keeping Vijay in the squad was a bit of a luxury they could not afford. With Ravindra Jadeja coming down the order and Ravichandaran Ashwin and Bhuvneshwar Kumar more than competent with the bat, India batting looks the strongest of all the teams in the ICC Cricket World Cup 2015.

That said, batting hasn’t been India’s problem in limited-overs cricket. India must sort out its bowling combinations and resources at the earliest. It needs someone to lead the attack and it needs to zero in on the bowlers who Dhoni and the team management believe will play in all the matches of the ICC Cricket World Cup 2015.

At this point, Bhuvneshwar Kumar seems the best bet to do that, unless Ishant Sharma finds his line and length and leads from the front. India’s bowling form will be thoroughly tested during the tri-series preceding the ICC Cricket World Cup 2015. Midway through this tri-series, Dhoni should have decided what his first choice bowling attack will be for the duration of ICC’s pinnacle event. There will be some experimentation early on, but by the time the tri-series is over, India should have its best 11 in place, the team it believes will take it all the way to the title.

Among the spinners, Ashwin is an automatic choice, the balance of the team will determine whether if India will play a second spinner or an additional medium-pacer.

This brings us to the all-rounders. This is a great opportunity for Stuart Binny to establish himself as an integral member of the India team. Conditions will be somewhat alien for Binny – hard bouncy pitches in a country where he hasn’t played before. He has to fight his way into the playing 11 and then cement his place, which the tri-series will allow him to do if he gets to play regularly. If he doesn’t feature in the tri-series, it is difficult to see him being an important member of the playing 11 for the ICC Cricket World Cup 2015.

In the last couple of days leading up to the team selection, much of the interest has centred around Yuvraj Singh, the Player of the Tournament when India won the title in 2011.

Yuvraj will be very disappointed and I am sure there will be a lot of sympathy for him in India, especially after he made three Ranji Trophy centuries on the trot. But it would have been a bolt from the blue if he had been named in the 15. To me, the writing was very clear when he wasn’t picked in the long list of 30 probables, given that he hasn’t played a One-Day International since December 2013.

Is this the winning combination, is this the team that is best suited to take India to a second successive World Cup crown? I am not sure how to answer these questions. At the end of the day, it will all be about how India plays on a given day, how it turns up day after day during the length of the tournament and the kind of synergy the players will bring with them. These are the crucial elements in deciding how far this side, or for that matter any side, will go in the ICC Cricket World Cup 2015.

Vijay Starrer Puli All Set to be Released Tomorrow: Check Out Some Interesting Facts