India Apprehensive as China’s Jialong Explores Minerals in its Backyard 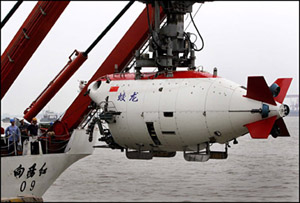 As the news of China’s submersible Jiaolong kicking off its deep-sea exploration for polymetallic sulfides, copper, zinc, besides collecting samples of biological organism, hydrothermal vent, India is watching the new invasion in its backyard that may deprive it of the mineral resources in the future.

It may be noted that China had obtained approval in July this year from the International Seabed Authority (ISA) to explore a 10,000 sq km area for polymetallic sulphide ore deposit in an international seabed region in the Indian Ocean, despite India’s disquiet.

The approval entails China to sign a 15-year exploration contract with the ISA, that allows it to enjoy pre-emptive rights to develop the ore deposit in the future.

China’s move has raised concerns in India as the Directorate of Naval Intelligence ( DNI) has expressed apprehension that the exploration would provide an excuse for China to send its warships just in India’s backyard.

More than what China gets in the seabed exploration, the base will provide Beijing an excuse to monitor the entire southern Indian Ocean, making it possible to send its massive ships, including warships, in the future freely. Unlike the US base Diago Garcia, China can now have its scientific mission passing by India’s southern waters frequently.

Jaiolong submersible had earlier undertaken similar mission in the Pacific’s Mariana Trench in June 2012 and reached its deepest depth of 7,062 meters. Chinese authorities said Jialong had collected 116 biological samples, 22 rock samples, 100 kg of cobalt-rich crust and 24 kg of polymetallic crust samples, as well as 1,232 liters of seawater from the Pacific Ocean.

While India is keen to explore the deep space, China is focusing both on sea and space for its future survival, pre-empting other major rivals in seabed mining for iron ore and related minerals which form key to any country’s superiority in a decade from now. Perhaps, it’s time Indian marine researchers wake to the call from the sea.