In a shocking disregard to Hyderabad culture, Telangana Deputy Chief Minister Mahmood Ali said the historic “Charminar” building will be razed to ground like the Osmania General Hospital, if it is found weak or in a dilapidated condition. He retreated his statement on Monday.

The remarks came when Ali said on Sunday that the 90-year-old Osmania General Hospital (OGH) in Hyderabad will be razed to build a new hospital, which received resistence from the opposition but not the entire public as such. In his defense of the government move, the deputy CM went a step further on Sunday saying even Charminar will be ‘razed’ to ground if found weak, unmindful of the public outrage the remark would attract. 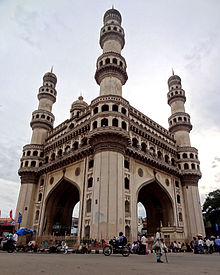 To soothen the feelings of shocked Hyderabadis, the minister later clarified that he meant ‘Charminar’ in a general reference to strengthen his argument for rebuilding Osmania General Hospital. “Charminar is our identity. We will strive to strengthen it. I was speaking in a general sense that after 1,000 years,” he said on Monday correcting his earlier remarks.

Built in 1591 to commemorate the beginning of the second Islamic millennium year, 1000 AH, by Quli Qutb Shah, founder of the city of Hyderabad, the building has become the symbol of Nizam dynasty and Hyderabad’s ‘Pehchan’. Located in the centre of Hyderabad, Charminar has become a landmark and a famous tourist destination and part of the tradition.

Mosque on Second Floor of charminar

The opposition to Osmania General Hospital that was built 90 years ago by the Nizam government for poor people is still regarded a monument in the city. The opposition parties consisting of Congress, MIM and TDP have been criticising the decision to demolish the building. Instead, they suggest a new building in adjoining 10-acre land would be a viable solution.

Telangana Congress working president Mallu Bhatti Vikramarka, Rajya Sabha MP V. Hanumantha Rao and others paid a visit to the hospital on Sunday and said they would resist the demolition plan and reminded the current government that Rs.100 crore was provided for modernizing the hospital prior to bifurcation of the state.

The current government headed by TRS is on a hyper-active path to modernize Hyderabad with free Wi-Fi spots set up in more than 17 areas of the city and providing it a future look and attract foreign direct investments in the state following the exit of many domestic investors to Andhra Pradesh after bifurcation.

Charminar was reportedly built with bricks made out of soil brought from Mecca, the holy site of Islam by Quli Qutb Shah, the 5th ruler of the Qutb Shahi dynasty and the neighbouring Makkah Masjid.

The Laad Baazar on the other side is famous for its jewelry, especially beautiful bangles, and the Pather Gatti in the vicinity is famous for its pearls. In its heyday, the Charminar market had some 14,000 shops, said reports.

One of the World Heritage listed monument by UNESCO, Charminar and other Qutb Shahi architectures reflect the Iranian-Indian mixture. “Given that the founder of the dynasty and key nobles were immigrants from Iran, their integration with the Deccani Muslims, and the local Telugu-speaking Hindu elite was reflected in the innovative and inspired blending of Persianate and Indic cultures that flowed from the successful integration of this multi-ethnic society,” says UNESCO in its write up on Charminar and Qutb Shahi tombs and Golkonda Fort, which are in the list.

Demonetisation: Railway Ticket Online Reservation to be Rs.40 Less Until Dec.31, Other Measures at Glance