Father of Indian Ornithalogy or bird-watching has been honoured 29 years after his demise by his genre who named a newly discovered bird species after him, while a bat species was named after him earlier. The ‘Birdman of India’ was honoured by Goa with a bird sanctuary named after him. 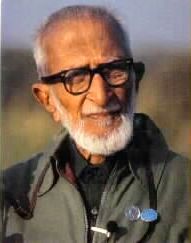 The bird, Himalayan Forest Thrush has been named Zoothera salimalii, and it is found in northeastern India. The study, carried out by Per Alström of Uppsala University, Sweden and Shashank Dalvi of Wildlife Conservation Society- National Centre for Biological Sciences, Bangalore.

The bird found in Western Arunachal Pradesh was discovered in two species of Plain-backed Thrush breeding and were segregated by elevation and habitat, one occurring in mostly coniferous forest up to the upper tree limit and the other in alpine habitats above the tree limit. Their songs were strikingly different, although no definite morphological differences were detected in the field, said researchers whose findings were published in Avian Research.

Researchers said it was earlier considered a single species, the Plain-backed Thrush Zoothera mollissima but it was found in species in northeastern India and the difference is their song. While the Plain-backed Thrush in the coniferous and mixed forest had a rather musical song, while those found in the same region, but on bare rocky habitats above the tree-line had a much harsher, scratchier, unmusical song, they explained.

The researchers studied several specimens from 15 museums in seven countries revealing the consistent difference in plumage and structure between birds from these two populations. “It was confirmed that the species breeding in the forests of the eastern Himalayas had no scientific name. Later, the new species was named as Himalayan Forest Thrush Zoothera salimalii . The high-elevation Plain-backed Thrush is now renamed as Alpine Thrush while it retains the scientific name of Zoothera mollissima ,” said researchers.

India Ranks 3rd with $11 Bln in Money Transfers From US: Report

Agni 5 Successfully Test-Fired, What it Means?