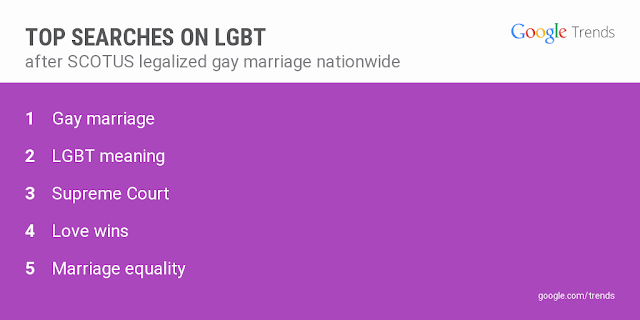 From eagerly-awaited U.S. Supreme Court rulings, to the ongoing debate over the Confederate flag, the week from June 19 to June 26 was dominated by the court verdict that drove huge traffic on the verdict, which was historic and afffects all the 50 states of the US. Other search trends are:

#LoveWins
Whether the query was “marriage equality,” “fourteenth amendment,” or “love wins,” searches related to today’s U.S. Supreme Court ruling that same-sex couples nationwide have a right to marry are spiking, with more than 2 million searches for the term “gay marriage” alone. Interest goes beyond the U.S., with “What countries allow same-sex marriage?” and “where is gay marriage legal?” among the top questions.

While today’s “thunderbolt” ruling is capturing most of the attention around SCOTUS, searches for the court have in fact been big all week. Yesterday, news that the Court had upheld a key portion of the Affordable Care Act was met with a 200,000+ search spike, and renewed questions like “How does Obamacare work?” and “Why do Republicans dislike Obamacare?”

Rising stars
Thursday’s 2015 N.B.A. Draft also attracted more than 2 million searches this week and half of the top 20 searches yesterday, with queries for first pick Karl-Anthony Towns spiking more than 1,000 percent. Looks like Minnesota Timberwolves fans had done their research ahead of the selection; Towns was the most-searched prospect in the state ahead of the draft. Other breakout names of the week included actor Tom Holland, who saw 500,000+ searches after he was cast as Spider-Man for the next film in the Marvel franchise. Holland’s home country of the U.K. topped the list of countries looking for details, but Spidey searches from people in the Philippines to the Netherlands show the global popularity of this character, even two years before the movie’s 2017 release.