Google Search Trends August 21-27: WDBJ to One Direction Split top Them All

The terrible images from the WDBJ shooting in Virginia dominated Google searches from august 21 to 27, while One Direction split hoax too took serious queries in the week.

A small TV station in Roanoke, Varginia, is shocked when two of its journalists were shot and killed live on air on Wednesday morning, when people are glued to their morning TV screens.

The gunman was none other than their erstwhile colleague and former reporter for the station, and if his horrible crime was designed for maximum shock and attention, it did work. Searches for Bryce Williams—the on-air name former employee Vester Flanagan went by—ran into the tens of millions as people looked for information and video of what had happened. 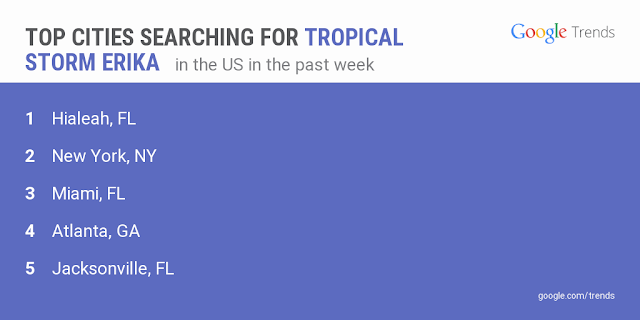 Katrina is back after making 10 years mark on Thursday as the Hurricane devastated New Orleans, but searchers in the U.S. over the last 48 hours have been looking ahead to another storm Erika which has left several people dead in the Caribbean island of Dominica. As Florida’s governor declared a state of emergency ahead of Erika’s predicted U.S. landfall Monday, the city of Hialeah in South Florida is the top of the list of cities searching for information on the storm. But whether the storm searches are coming from the U.S. or the Caribbean, “Erika path” and related terms are up more than 1000 percent this week.

MTV Awars have been overshadowed with Taylor Swift and Nicki Minaj following their much-buzzed about Twitter spat over nominations for Music Video of the Year.

“We turned to search to see if trends could show us whether people are leaning Team Swift or Team Minaj headed into the weekend. Tay-Tay’s music video “Blank Space” is in the lead in the Best Female Video category, followed by Minaj’s “Anaconda.” Though “Anaconda” was not nominated for Music Video of the Year—a category that Swift also leads for ‘Bad Blood,'” said Google searches writeup done by Abbi Tatton. 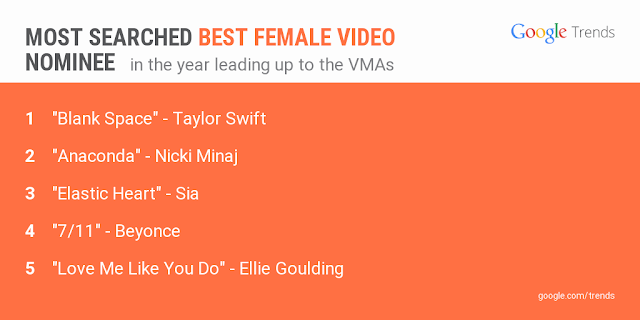 Otherwise, the week also saw whether One Direction will be parting ways up brought a 200,000 search spike earlier in the week. “Are One Direction splitting up?” was the top search question, before the band clarified they are actually just taking a break. As former band member Zayn Malik has already decided to go solo, the search tea has given a glance at what kind of popularity the current members have should the band disband. 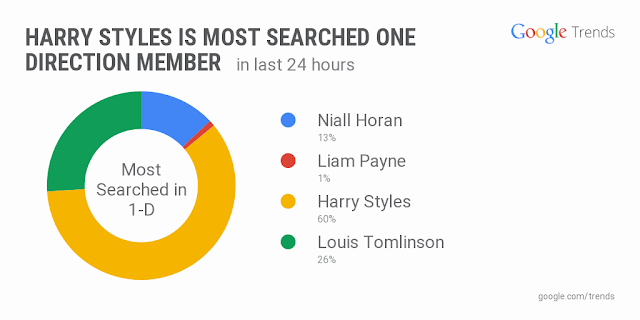 Most likely to launch a successful solo career based on search buzz? Harry Styles is the resounding winner, taking a whopping 60 percent of the 1D searches. “Our advice for Liam Payne: at 1 percent, don’t give up your day job,” concludes Abbi.