Galaxy Note 4 vs iPhone 6 Plus: Which one is better? Specs Compared at a Glance

Released by the two tech giants in quick succession in India, Samsung’s Galaxy Note 4 wins the race in some specs while its opponent Apple’s stable iPhone 6 Plus retains its superiority in many others.

Samsung Galaxy Note 4 has a metal frame with bevelled edges and a removable, soft touch back cover and shorter than the iPhone 6 Plus. The iPhone 6 Plus is all metal except antenna inserts. iPhone Plus is slimmer than the Note 4.

The Note 4 can shoot 4k UHD video at 30fps, take wide 120-degree selfies, draw with the new S pen stylus that has 2048 levels of sensitivity, do multitasking with multiple windows of apps and swap out batteries, expand the memory by another 128GB, which are absent in the iPhone 6 Plus.

Both offer optical image stabilisation. Video recording in the iPhone 6 Plus can record time lapse movies and slow motion, while the Note 4 can take 4k resolution video at 30fps.

Both have fingerprint sensors but the iPhone 6 Plus is better as the user has to merely place a finger on the home button rather than slide it across as it is in the Note 4. The Note 4’s major feature is its stylus with draw-write-sketch feature.

But the iPhone 6 Plus is also unique with its own specific features like shooting super slow motion video @ 240 frames per second, new reachability mode that makes the large screen accessible with one hand, shoot time lapse videos and a new barometer that measures elevation changes, steps and distance. 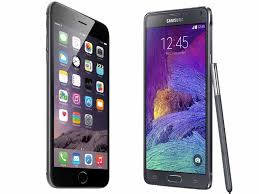