At a time when Jio and Airtel are struggling to gain market lead with their 4G arsenal, NASA is developing what it said 100 time more powerful high-speed internet of the sky.

Known as the Laser Communications Relay Demonstration (LCRD), it enables NASA experiment with much higher data rates for connections between spacecraft and Earth, such as scientific data downlink and astronaut communications. Stretched to market conditions, it can revolutionize the way we use internet meagerly at 4G and breast beat at our accomplishment.

Steve Jurczyk, associate administrator of NASA’s Space Technology Mission Directorate said:“This technology has the potential to revolutionize space communications.” The project in collaboration with the Human Exploration and Operations Mission Directorate’s Space Communications and Navigation program office, MIT Lincoln Labs and the U.S. Air Force is taking the tech contours to the highest level in sky and on Earth.

Engineers are currently testing the optical module assemblies on the Goddard-built optical test bench to ensure pointing accuracy during the upcoming mission of optical communications. It encodes data onto a beam of light, which is then transmitted between spacecraft and eventually to Earth terminals at the rates 10 to 100 times better than current radio-frequency (RF) communications systems. 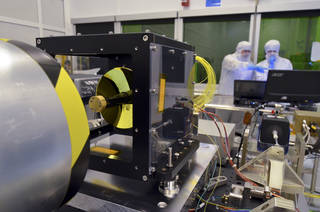 An engineer examines the gimbal and latch assembly component of one of LCRD’s two optical module assembly. The optical module, when combined with the modems and controller electronics, make up the LCRD’s flight payload. Credits: NASA’s Goddard Space Flight Center/Sandra Vilevac

“LCRD is designed to operate for many years and will allow NASA to learn how to optimally use this disruptive new technology,” said Don Cornwell, director of the Advanced Communication and Navigation, NASA.

The laser terminal for the International Space Station, still under design, will use LCRD to relay data from the station to the ground at gigabit-per-second data rates. We plan to fly this new terminal in 2021, and once tested, we hope that many other Earth-orbiting NASA missions will also fly copies of it to relay their data through LCRD to the ground, they noted.

To be functional in two to five years, two ground terminals equipped with laser modems are being located in Table Mountain, California, and in Hawaii to capture data transfer from LCRD, which will be located in an orbit that matches Earth’s geosynchronous orbit, between the two stations.

LCRD is scheduled to be launched in summer of 2019.

Roll up TV, take it on tour and chill out