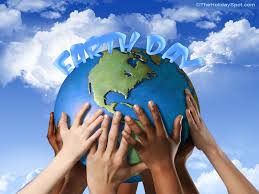 Come April 22, the earthlings introspect whether they have done any damage to the planet earth they are living in. If so, how to correct the damage done in the past and who should pay how much in the present for such green funds tops the agenda.

Ever since 1970 when the first Earth Day was observed, the successive generations have grown with modern jargon such as — global warming, deforestation, ozone layer depletion, air pollution, green house effect, irreparable damage, carbon funding, green fund, save ecosystem, mother earth, save forests or trees — to be precise — environment.

Celebrated in more than 192 countries all over the world, the original Earth Day was celebrated on spring equinox around 21 March but later the United Nations has made 22 April the official International Mother Earth Day.

Traceable to peace activist John McConnell whose proposal to UNESCO to observe a day in honour of mother Earth on March 21 was taken up by US senator Gaylord Nelson on 22 April, 1970. Initially, it was only confined to the US but spread all over the world activist Denis Hayes.

So every year the Earth Day comes and after a day’s action, it is often forgotten by the people and officials. To make it round the year 24/7 effort, the Earth Day Network (EDN) has been formed to promote, educate and influence policy makers and opinion creators to take environmental action ahead worldwide.

Currently, EDN  reaches 22,000 organisations in 192 countries. With 30,000 educators, the network is striving to reach many communities to motivate them participate actively for a better protection of the Mother Earth not merely on April 22 but throughout the year.