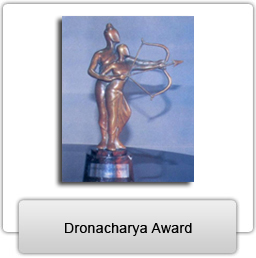 The Indian ministry of sports and yout affairs has announced the names for its prestigious awards in the field of sports this year and the Dronacharya Award, instituted in 1985, to felicitate eminent Coaches who have successfully trained sportspersons or teams and enabled them to achieve outstanding results in international competitions has gone to Naval Singh in athletics and para-sports.

Besides Naval Singh, Anoop Singh was given the award in wrestling, Harbans Singh in athletics for his lifetime contribution, Swatantar Raj singh for boxing, Nihir Ameen for swimming category.

The second prestigious Dhyan Chand Award for Lifetime Achievements in Sports and Games, instituted in 2002, is given to honour those sportspersons who have contributed to sports by their performance and continue to contribute to the promotion of sports even after their retirement from active sporting career. Dhyan Chand Award 2015 has been given to three sports persons — Romeo James in Hockey, Shiv Prakash Mishra in tennis and T.P.P. Nair in volleyball.

Rashtriya Khel Protsahan Puruskar, introduced in 2009, are given to entities, both in public sector and private sector and non-governmental organizations, with a view to recognizing the contribution made to sports development.

This year’s Rashtriya Khel Protsahana Purushkar, 2015 has been given to the Directorate-General of Military Training for identification and nurturing of budding or young talent, Coal India Limited for encouragement to sports through Corporate Social Responsibility, Haryana Police for employment of sportspersons and Sports Coaching Foundation in Hyderabad for overall sports for development category.