Terrorism has reached the Thailand capital Bangkok that was world famous tourist centre till now as the massive bomb explosion at a shopping centre near the famous Erawan Shrine in Ratchaprasong shocked the world, killing 27 people and injuring many more.

The bomb on a motor cycle went off around 19:00 local time (12:00 GMT). Thailand police spokesman Lt. Gen. Prawut Thavornsiri told AFP:”I can confirm it was a bomb, we can’t tell which kind yet, we are checking.” 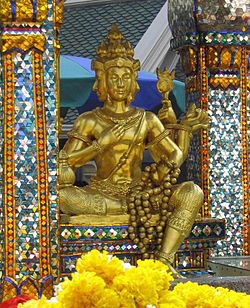 The four-faced Brahma (Phra Phrom) statue in Erawan temple, Bankok. A bomb explosion nearby killed 27 and injured more than 80 on Monday, August 17, 2015.

If the target has been the Hindu shrine, then it is likely to be a religious group behind it and Thailand’s southern region is beseiged with Islamist insurgency but never in the past did the religious groups targeted the national capital.

Other reports and local Twitter messages said a second bomb was found in front of Gaysorn shopping centre at Ratchaprasong a little later.

A popular tourist attraction, it often features performances by resident Thai dance troupes, who are hired by worshippers in return for seeing their prayers at the shrine answered.

On 21 March 2006, a man who vandalised the shrine with a hammer was killed by bystanders. However, two months after the incident a new Brahma statue was installed in the shrine.

Live Updates: Here are some live updates from Twitter:

4 foreigners are believed to be among the dead after bomb explodes in Bangkok http://t.co/gZPlLQBHXT pic.twitter.com/Xiwd8N9IqY