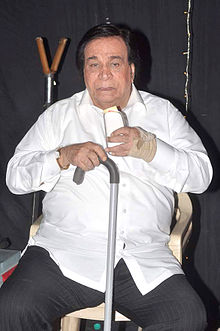 Yesteryears actor Kader Khan who was seen many chqaracter roles ranging from comedy to villain has been admitted to Ramdev Baba’s Patanjali Yogpeeth ashram in Haridwar with acute diabetes and other age-related ailments.

Baba Ramdev’s associate Acharya Balkrishna said the actor who was admitted on Wednesday would remain in the ashram for three weeks. Apart from diabetes, Kader Khan was suffering from severe join pains that he is confined to wheelchair.

“I met Kader Khan in Mumbai sometime back and advised him to visit Patanjali for further treatment,” said Balkrishna, according to reports. Kader Khan was recently in news for death hoax that went viral forcing him to come open and condemn the perpetrators.

He was admitted to hospital on and off in the last few months with several ailments. Otherwise, he was a script writer who became a comedy icon in many films of David Dhawan, especially with Govinda in the 1990s.

Kader Khan, 80, was born in Afghanistan and his parents moved to India where he graduated from an engineering college in Mumbai and was a professor of civil engineering before entering the film industry with his debut film ‘Daag’ in 1973. He has written script and dialogues in over 250 films and has acted in over 300 films in Hindi and Urdu.

He was among the highly paid script writers of Manmohan Desai for the film ‘Roti’ in 1974. He was reportedly paid Rs.121,000 those days. He has acted with heroes like Jeetendra, Feroz Khan, Amitabh Bachchan and Govinda.

His recent films include Tevar (2015), Hera Pheri 3 (2015), Mujhse Shaadi Karogi (2004), Lucky: No Time for Love (2006) and Family: Ties of Blood (2006). He had hosted comedy TV series titled ‘Hasna Mat’ on Star Plus.He was awarded in 2013 the Sahitya Shiromani Award for his work and contributions to Hindi Film industry and Cinema. Last year, he discreetly paid Hajj at Mecca with his sons.

Sanya Malhotra is prepping for her next film ‘Love Hostel’