Beware of Gas Companies’ Tricks, Lest You Loose Your Gas Subsidy

It is a campaign undertaken by the central government to dissuade citizens from utilising gas subsidy but seeing little response to its TV ads,  the government-owned gas companies have hit upon new  tricks to trick people into pressing the wrong button (0 or 1) and give up their gas subsidy.

The modus operandi is clearly aimed at tricking the gullible mobile phone users to press 0 instead of 1 while booking the gas refill so they will loose the subsidy.

If you are booking gas via mobile or phone, this is glaringly “visible and tricky”. When the voice-operated booking system IVR asks you to press 0 which stands for cancelling gas subsidy, any momentary lapse by the subscriber to press on the button ‘0’ will end giving up the subsidy for good.

While, you have to be careful to wait for the next option ‘1’ to book your gas cylinder, one mistake will take away your right to get little gas subsidy that the government doles out reluctantly.

Moreover, the booking system has been “m’0’dified” recently by the new system to trick citizens into giving up their gas subsidy without their written consent. Many of them will not even be aware of what the trick is and when they realise, it would have gone as a thank you message will reach you for surrendering the gas subsidy.

While the busy urban people fall prey to the new trick, even the most-eligible rural and illiterate women would fall for the mistake that was cleverly inserted by the new system of gas agencies owned by the government of India.

Enquiries with the gas companies yielded no response so far. Perhaps, before the opposition and people raise hue and cry over it, the gas agencies are aiming at few lakhs of customers “surrendering” their gas subsidy by just pressing the WRONG button.

The social media, which Prime Minister Narendra Modi relies on, is up in arms over the new “TRICK” of the gas agencies and the message is making round all over the mobile phones among friends and families as of now.

For those willing to gie up gas subsidy, here is the process. 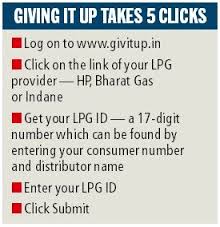